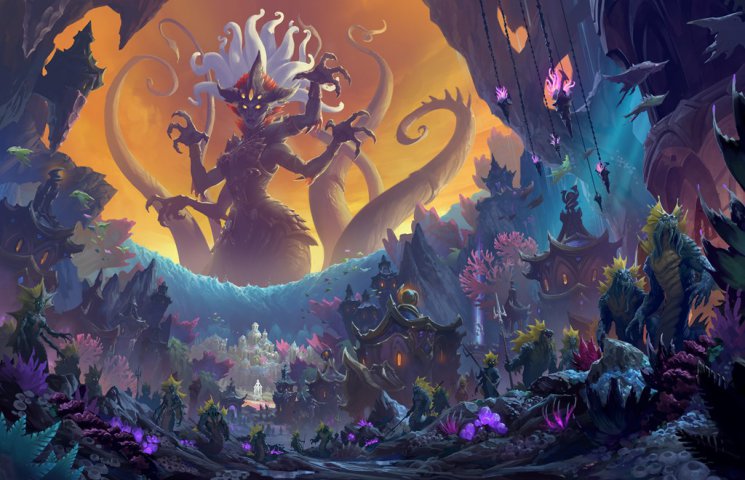 World of Warcraft: Shadowlands gives us a new, terrifyingly beautiful story about how death is just the beginning.

Toto, we're not in Kansas anymore. We're not even in a familiar world - no orcs, no elves, no goblins, not even the ugly empty locations from the first installments of the game (ok, I know, they had their charm).

The otherworld is charming beyond all understanding.

Meeting Archon - the leader of the covenant - is a great event
World of Warcraft: Shadowlands came to us with a delay. Blizzard decided to take another month to fine-tune the balance of things, at which, let's be honest with ourselves, WoW can't be balanced. Nevertheless, in my opinion it was worth the wait.

Sylvanaaaaaaaaas!
As it usually happens in World of Warcraft, the story begins with a pre-patch, which gently prepares us for the whole story. Azeroth once again (seriously) faces annihilation, as the scourge of the undead from Northrend once again moves towards human settlements. What do you mean, the Lich King is supposed to be watching over them, there always has to be a Lich King, hello, Bolvar, you d...

"Good morning, which way to the tourist information?"

As we know from the trailer, Sylvanas Windrunner is responsible for upsetting the delicate balance, having - literally and figuratively - shattered the sky to create a transition between the world of the living and the dead. Over Northrend hangs the shadow of the Maw, and the shadow of the scariest, nomen omen, place in the Shadowlands.

Our main bad guy has epic powers and epic nuthin' that have become memes and probably have a consciousness of their own
As if that wasn't enough, Sylvanas decides to kidnap the high command in Azeroth, and thus Thrall, Jaina Proudmoore, Anduin Wrynn and Baine Bloodhoof fall into her hands. For some reason, she has not hunted Talanji - though, it seems, this one is protected by Bwonsamdi, the loa of death. And this one could spill.

As you can see, the cutscene format is improved. And poor Anduin was left in the Maw
Sylvanas, on the other hand, fails to kidnap Tyrande Whisperwind, but Tyrande is not a small and innocent gazelle, she will jump into hell and make a galimatias there.

The afterlife is a little familiar

In World of Warcraft: Shadowlands, we travel to the netherworlds, where the souls of the slain wander: both the dead of Azeroth and those from other planets and worlds. However, Shadowlands look familiar, because the creators of World of Warcraft love eclecticism, and as a result, we find something new every now and then.

Strange is the living creature in our land

Thus, we have four covenants, whose general character can be presented as follows:

- Bastion: spartan angel building constructs, with a society of Roman structure and hierarchy. The climates of Christian heaven (also with fallen angels),

A touch of doubt makes your spirit no longer undefiled...
- Maldraxxus: a necropolis in true norwegian black metal atmospheres, where plague, lava, monsters fly from every side. Maldraxxi prefer the cult of force and resemble vividly the Scourge that attacked Azeroth,

... But then again, who cares...
- Ardenweald: a faerie realm reminiscent of Shakespeare's A Midsummer Night's Dream, a nod to Celtic beliefs about the Faerie Queen,

... in the end, there are things that matter...
- Venthyr: vampires during the French Revolution; the gothic atmosphere of 19th century London with dark graveyards, carriages and lamps mistily illuminating the narrow streets.

... and more importantly.
Our main enemy is Jailer, the ruler of The Maw, whose domain we'll be happy to attack with the hit-and-run method. However, we won't stay there long, because Jailer doesn't like visitors - which is a pity, because in his dangerous land there are a lot of profitable items.

Covenants are an interesting refresh of the concept that appeared in Legion (although there we had places and artifacts assigned to classes, whose power we developed): we must make our sanctum grow, our covenant
Mechanics anima does not touch
However, the system shows some weaknesses from the very beginning. Although now there is definitely more to do than in Battle for Azeroth, we still collect something for "A", in this case anima, the power of souls who are stuck in the afterlife (in BfA it was azerite, in Legion - artifact power). It's not mandatory, yet some see it as repeating the same mistake.

One of the improvements, which we buy for the anima

The launch of the game is also not without some bugs and shortcomings. Some players complain, for example, that some of the mobs are simply too strong for this level of difficulty, others in turn are bothered by the trimming of certain aspects of crafting.

Fixing old mistakes?
We are still playing World of Warcraft. This means a series of "fetch five bear skins and kill eight rabbits" quests. But that's also changing, because the main story line has its own rules and the collector quests are gradually becoming obsolete, becoming mostly world quests that you do from time to time.

The feeling of being a hero gets stronger with every addition
We were dutifully tempted before the add-on itself that the new mechanics wouldn't force us to play specific specializations and skill combinations from covenants. It's not true and it's never been true, there will always be some overlapping components, because World of Warcraft can't be balanced.

Nevertheless, the new addition again allows you to do what was so enjoyable in Legion - we gather forces, generate power, take care of our own garden (sometimes literally) and we can go through the whole game practically on our own (apart from raids and dungeons, of course).

"They'll never go to that extent!" - developers about players
New players will also find something for themselves. Since Shadowlands came out, there has been a level reduction to 60, and it no longer takes a week to level up a new character. New players can embark on a journey through the new land and be introduced to all the mechanics and possibilities that World of Warcraft so eagerly offers.

However, to those who share hopes and fears that this is no longer World of Warcraft, I must say that it is still the same game. Though in a different edition, though seemingly doing different (in my opinion: better) things, we are still where we were, for better or worse.

World of Warcraft: Shadowlands will be a real treat for those who loved Legion and would like to venture into Azeroth again. New players will also find something to enjoy here. However, we must remember that this is still World of Warcraft with its sins...