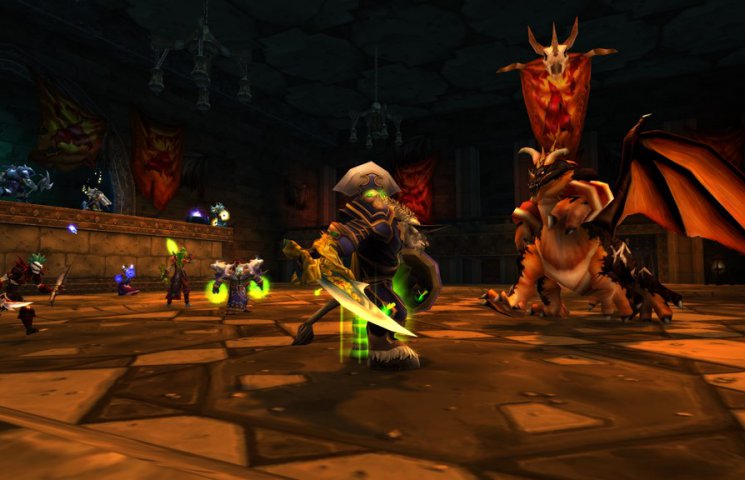 WORLD OF WARCRAFT: BATTLE FOR AZEROTH REVIEW - THE KING DOES NOT LOSE HIS CROWN

The previous addition to World of Warcraft was really great in our opinion. Of course, it had some flaws, but it still drew us in for hours. What is it like in the case of the next expansion to this game by Blizzard? Does it match up to its predecessor? Is it worth spending your money on it? Find out by checking out our impressions from the game.

In Legion as players we had to face the Burning Legion itself, as the name suggests. So the main theme of the add-on was the fight against demons and their allies - Gul'dan, Kil'jaeden, and more. Battle for Azeroth presents us with a completely different scenario. This time we return to the classic battle of the Covenant against the Horde, which history dates back to the first game of the Warcraft series.

At the very end of the Legion, the fallen titan Sargeras, bringing defeat, drove his sword into the planet Azeroth. As a result, this one was severely damaged. Soon, in the area of the "wound" left behind, a new raw material was discovered - Azerite - which is literally the blood of the planet, or rather of the unborn titaness sleeping inside it. It has incredible properties, both medicinal and useful in battle - which is why it quickly became the object of contention between the Covenant and the Horde.

As tensions between the factions grew, Sylvanas, or the leader of the Horde, decided for no apparent reason to attack the great tree of Teldrassil, the home of the Night Elves. Unfortunately, this one was burned to the ground. In retaliation, the Covenant set their sights on reclaiming Lordaeron, and so the war began.

Each faction, trying to gain advantage over the other, decided to go in search of new allies. We, the players, are given a task to gain those allies and that's what the appendix revolves around, at least at its initial, current stage.

Even before the premiere of Battle for Azeroth, if we pre-purchased the expansion, we could get some of these allies. I'm talking about the so-called Void Elves or Highmountain Tauren. Gaining their trust was connected with unlocking a new so-called "allied race". As of launch day, each faction now has access to three allied races (more to come soon). This is an interesting concept, but it has a huge drawback. Because of the time it takes to unlock these races (often spent playing through the previous expansion), it can turn off new players. Usually any new races or character classes were unconditionally available to everyone when expansions debuted.

Let's get back to the topic of finding allies. Battle for Azeroth storyline takes us to Kul Tiras (Alliance) or Zandalar (Horde). Our mission is to increase the power of the faction we belong to by gaining new allies. Alliance players have to regain the trust of Kul Tiras island's inhabitants, and Horde players - convince the once powerful, but now forgotten troll tribe to themselves.

BEGINNING OF THE ADVENTURE WITH THE ADD-ON

Leveling - an experience of moderate pleasure

Each expansion to World of Warcraft introduces a new "level cap" - the maximum level of experience your character can reach. Battle for Azeroth raised it from 110 to 120, so players must explore the lands added in the expansion, as well as complete new quests to gain further levels of experience and eventually reach the "end game content". How does this process look like in BfA? Is it enjoyable?

While leveling up in Battle for Azeroth isn't bad, we had a bit more fun with it in Legion. Sure, the add-on offers a lot of interesting and unique quests, but many of the others are typical "kill" or "fetch" filler. As far as Covenant lands go, the best experience was exploring Drustvar, which offers a dark, heavy atmosphere and a fairly continuous story line. Boralus was only slightly worse, while Stormsong Valley, despite its captivating vistas, simply bored us. Don't get us wrong - all the locations were designed very well. We're just not satisfied with the content that some of them were filled with.

It's worth mentioning that during the leveling process you can take part in the so-called "War Campaign". It includes missions related to the exploration of new locations created for the opposing faction (for example, we, as players of the Alliance, went to Zandalar), as well as warfare in these areas. Unfortunately, in order to unlock the next stages of this campaign we need to gain the appropriate level of reputation with the group called "7th Legion", which unnecessarily stops our progress and later forces us to perform the so-called World Quests, which we also had to deal with in Legion.

At the beginning of the Battle for Azeroth adventure each player receives an item called Hearth of Azeroth, which will occupy a necklace slot in our inventory. It is connected with the new system, which strongly resembles what accompanied the artifact weapons in Legion. In BfA we can also gain artifact power, but this time we use it to improve certain elements of our weapons.

While our Heart of Azeroth will be gaining levels, its stats and item level will be increasing. During this time, the ability to upgrade better and better Azerite Gear - a new type of equipment - will be unlocked. This improvement is associated with gaining certain buffs and raising the level of these items.

Unfortunately, subsequent levels of Hearth of Azeroth are getting more and more expensive. This means that those who want to have a chance to achieve in any form of PvP, or be a significant member of raid groups, are in for a lot of grind. Artifact power is therefore our number one enemy in Battle for Azeroth. How can artifact power be obtained in this expansion? For example, by opening chests scattered around the game world, completing quests, or going on expeditions to unknown islands.

The aforementioned expeditions are another new feature introduced in Battle for Azeroth. Within them we go in teams of three on trips to random islands, on which we are supposed to find Azerite. Our task is to collect a certain amount of this resource before the team belonging to the enemy faction. We can do this both by hunting for creatures inhabiting these lands and searching for deposits.

Carrying out expeditions we can gain not only artifact power, but also special rewards, such as mounts. In our opinion, however, it is worth engaging in them not only because of that, but also because they are an interesting departure from the standard activities that WOW offered so far. It is worth mentioning that with time, expeditions with an increased level of difficulty and PvP expeditions can be unlocked in the game.