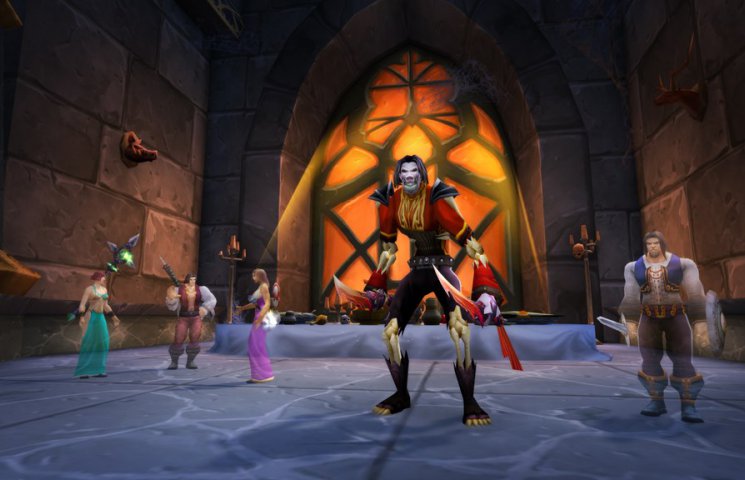 When a character is created, the question before every player is which race to take for the chosen class. Each race, whether on the Covenant or Horde side, has its own unique abilities. Some may be more appealing than others depending on which class the player wants to use.

This page lists all of the races' abilities and which ones work best with each class.

Important: Regardless of the information contained in this article, the choice should come down primarily to personal preference. There are many different racial skills and some of them may be useful in very specific circumstances. Nevertheless, the choice remains with the player. The character can not be changed later, so there is no point in developing a hero to level 60 if we do not like him. Such a choice should not be based on one race skill, which will be useful only in certain situations.

The best races for a druid

Unlike other classes, only one race from each faction can become a Druid in "World of Warcraft Classic". Covenant Druids can come from the Night Elves, and Horde Druids only from the Tauren.

Interestingly, each race has different benefits depending on the form the Druid takes. Blur in the Shadows allows Night Elves to use Sneak more often, and Speed increases the chance to dodge when in Cat form.

Tauren Stamina is further enhanced in Bear form due to increased health, and War Stomp is an excellent tool for crowd control.

Looking to level up a Druid? Check out our guide with tips and aids.

The best races for the Hunter

Two Covenant races and three Horde races can become Hunters. Here they are:

It is worth remembering that of all the races, the Night Elves boast the greatest basic agility. While this does not help in many situations, it gives them the highest base damage output per second.

Considering PvE, the Night Elves will be the best choice due to their increased dodge efficiency and their Blur in the Shadows ability, which will keep them out of danger. Trolls are also a great choice, dealing with Beastmen with ease and the Archery skill will increase their survivability against some enemies.

When it comes to PvP, Dwarves will be the best. They are able to survive longer in melee compared to other classes thanks to their Stone form, which allows them to remove the effects of Bleed, Poison, and Disease. Orcs are also a good choice due to their higher stun resistance and Blood Fury ability (which is best in melee).

The Tauren's war stomp and increased health are more of a defensive addition than an attack, as the Hunter works best in ranged combat where he shouldn't take damage.

Want to level up your Hunter? Check out our guide with help on the best wards, talents, and other tips.

The best races for the Mage

Two Covenant races and two Horde races can become Mages. Here they are:

Usually for PvP combat, Gnomes are the best choice. Their Intellect bonus improves the stats most important to a Mage, and their Maestro of Escape ability can keep them from getting stuck in an enemy's line of attack. The Humans' ability to detect stealth can be extremely helpful, but certainly less often useful.

Trolls are a good choice for players who want to focus on PvE. Their advantages include increased damage output when fighting Beasts, a "Berserking" skill that increases spellcasting stats, and a Regeneration skill to reduce recovery time. Undead, however, are often a better choice due to their Will of the Abandoned, which gives them an advantage over Priests and Warriors.

Looking to level up a Mage? Check out our guide with help on talents, spells, and other tips.

The best races for a Paladin

The Alliance is the only faction that can select a Paladin. There are two races to choose from: Humans and Dwarves.

Humans are the more commonly chosen race for both PvE and PvP play. Their improved sword and mace skills give them a better chance of hitting, and their sensitive enemy detection makes it easier to pin down rogues.

In PvP combat, a Dwarf's ability to remove the effects of Bleed, Poison, or Curse can be extremely useful, but such a character will not use their shooting skills.

Will you be playing a Paladin? Check out our guide for tips and tricks on the best gear to equip, talent spending, and the most efficient way to level up.

The best races for the Priest

Unlike other classes, the Priest has his own skill additions for each race. Each of them can learn a different spell on their missions. Spells for each race:

Since Priest has many different options for races, there are more things to consider. On the Covenant side, Dwarves are usually the best choice. Their Fear Ward is highly useful in both raiding and PvP. Additionally, they can use Stone Form and Desperate Prayer.

The Horde's favorites are Trolls and Undead. Trolls have a lot of use for weakening spells, as well as the skill "Berserking", which allows them to easily deal with beasts. For the Undead, the Will of the Desolate is extremely helpful in PvP, and the Priest's spells additionally deal massive damage and weaken enemies.

Will you be playing a Priest? Check out our guide with tips and tricks on the best equipment, spending talents and choosing a profession that will also earn you money.

The best races for a rogue

Almost all races, except for the Tauren, can choose this class.

Humans are a great choice for a rogue. Especially in PvE, their sword skills are excellent (they deal damage easier). Their sensitive detection of enemies gives them an advantage in PvP battles against other rogues. Gnomes are often seen as one of the weaker races in this class. Their Intellect gives them no advantage, and their Maesto Escape ability, while very helpful, can easily be replaced by Improved Sprint.

For the Horde, both Orcs and Undead are good choices for a rogue. Orcs can combo their Blood Fury for increased damage, and Stun Resistance gives them an advantage against other rogues and warriors. For Undead, the Will of the Abandoned allows you to easily defeat Priests and Warlocks.

Will you be playing a rogue? Check out our guide with tips on PvE and PvP combat, as well as spending talents and places to find good swords or daggers.

The best races for the Shaman

The Horde is the only faction where you can choose a Shaman class. There are three races to choose from: Orcs, Tauren, and Trolls.

All three races have their advantages in this class. Trolls work particularly well in PvE battles. They excel at killing Beasts and can combine the "Berserking" skill with their hybrid abilities.

Orcs also fight well as Shamans, especially in PvP. This is due to their stun resistance, as well as their Blood Fury, which further enhances their short range offensive spells, and their axe skill, which makes them deal more blows.

Tauren are also a good choice, although not as exciting. Their high health is made up for by the class' low weapons, and their War Stomp stuns enemies while Earthbind Totems slow enemies.

Will you be playing a Shaman? Check out our guide with tips on the best ways to level up, talents to knock down enemies, and missions not to miss.

The best races for a warlock

Two Covenant races and two Horde races can become Warlocks. Here they are:

As with Mages, Gnomes are the more practical choice on the Covenant side. Their increased Intellect provides better stats, and the Maestro of Escape skill helps in PvP battles. On the other hand, the ability to detect stealth in Humans becomes significantly limited here.

Both Orcs and Undead are great choices for a Warlock, although the Orcs' racial abilities seem useless compared to the Undead. Orcs can't use their Blood Fury or axe fighting skills. Undead, on the other hand, can still effectively use Will of the Damned against other Warlocks in PvP battles.

Will you be playing a Warlock? Check out our guide with tips on how to create the most powerful Warlock, how to best allocate talents, and more.

The best races for a Warrior

Unlike the other classes, any race from either faction can become a Warrior.

Humans are generally described as a very good choice for Covenant Warriors. Their sword and mace combat skills work well, and their sensitive stealth detection helps against rogues. Gnomes are best suited for PvP battles, because without the Maestro Escape skill it's easy to launch a lightning fast attack on a Warrior. However, their Intellect is of little use here. Dwarves can put their Stone Form to good use, but it's the only powerful skill that will be of any use.

On the Horde side, one of the better races are the Tauren. They are born tanks with a lot of health and the ability to stun many enemies that come near them. Orcs will work well in both PvP and PvE. Their Blood Fury and stun immunity will be extremely effective, and their axe combat skill, although it works mostly on Humans, is a good investment. Undead have their Will of the Abandoned, which can save their skin in situations where someone launches a lightning fast attack on a Warrior. Trolls, on the other hand, have better regeneration abilities, which will come in handy in moments of downtime while leveling up, since Warriors are particularly slow at it.

Will you be playing a Warrior? Check out our guide with tips and tricks on how to level up easily, what to invest talents in and much more.