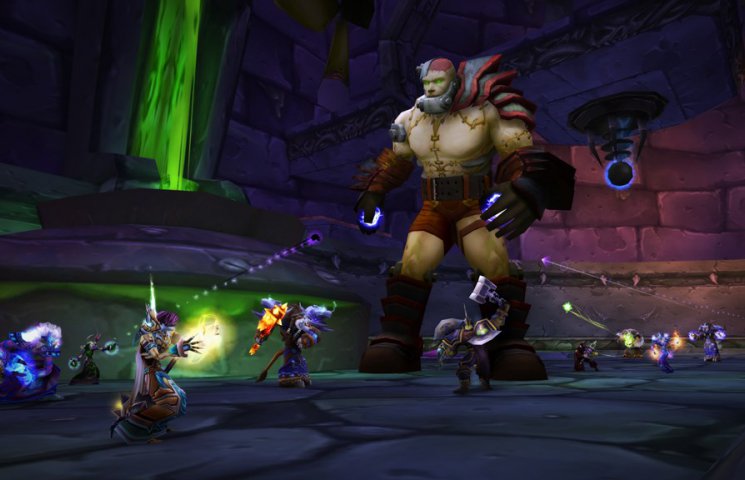 What do we know about World of Warcraft: Legion?

Certainly that the new addition is associated with hopes for a return to the old quality of play.

World of Warcraft needs no introduction to anyone. This king of MMORPG premiered 11 years ago, and at its peak it had 12 million active subscribers (people who pay a monthly subscription). Currently, it is said to be about 5 million (which is still a huge number), but it should be remembered that this year tokens were added to World of Warcraft, giving the ability to pay for it with in-game gold, which may understate this number. As you can see, Blizzard's production has long had its best period.

A chance for a better tomorrow is the newest addition (the sixth in turn) entitled Legion. Its premiere is scheduled for next year (it's said to take place on September 21), but there's already a lot of buzz around it. It was announced during this year's Gamescom and immediately shocked the fans. There were a lot of conspiracy theories and speculations about this expansion. All because of the players who expect a return to the past and forgetting the mistakes of the existing expansions.

What do we know about Legion?

The second (after Death Knight) heroic class will be introduced, the so-called Demon Hunter. It will be available only for Night Elves and Blood Elves. It will have two specializations: Vengeance (tank) and Havoc (DPS), and will start the game at level 90. She is styled as a certain condemned Night Elf who likes to shout: "You are not prepared". (yes, I mean Illidan). The Demon Hunter will receive special equipment, including an original weapon type and a starting location with a story path.

Artifacts, or special weapons prepared for each class and its specialization (there will be 36 of them in total). Such equipment will have its own perk system and will increase its statistics along with the experience points earned by the player. What's interesting, artifacts can be fairly freely personalized, modifying their color, skins and visual effects.

The maximum character level will be increased to 110 (and there is no end in sight...)
Broken Isles will become a new continent in the expansion. They will consist of a group of islands where Tomb of Sargeras (where Gul'dan opened the portal for demons) and Pillars of Creation are located. Broken Isles will be the center of future events, as it is here that players will fight for the future of Azeroth, trying to stop the attack of dark forces.

Class Hall, or Orders, is a modified version of garrisons known from Warlords of Draenor. We'll get NPCs at our disposal and train them to fight against demons. Each player will receive the Order depending on their class. We'll send them on missions and observe their development. It was announced that they will take an active part in the plot of the supplement, so maybe they will stop being a mini-game and become an integral whole.

It has been promised that professions will be completely rebuilt and players will finally get proper rewards for their work. They have been neglected in the current add-on, as they have been somewhat replaced by garrisons. Professions will be earned through special quests. In addition, they will receive three-level ranks, determining their quality. Deposits (raw materials, flowers) will receive a sharing system, so now, if you spot them, no one will steal them from you - everyone will be able to dig up the ore, without fear that it will disappear.

There are also changes to the honor system as part of the PvP mechanics. Blizzard reached for solutions inspired by online shooters and introduced ranks, which will be a total of 50. Special perks and prestige ranks await the best players, rewarding them with unique mounts or unique skins for artifacts.
What would an MMORPG be without dungeons and raids? In Legion we first get Emerald Nightmare, set in Emerald Dream - there we chase after Cenarius, (whose daughter recently found her way to Heroes of the Storm). Elsewhere, we'll look for Illidan in an ancient prison for demons, we'll visit the former lair of Deathwing, I mean Neltharion, and we'll fight with Gul'dan, who'll be stirring the plot all the time.

Item drop system will return to favor. This means that fans of killing monsters in bulk will be happy again. Their efforts will be rewarded with the possibility of obtaining legendary items.
In addition, we'll get our own wardrobe, where we'll keep the "looks" of items and entire outfit sets. All due to changes in transmogrification (what's the word...), allowing us to almost freely change the skin of a given part of the equipment. It will be possible to change the image of the shirt, tabard, and even the enchants on weapons - great, now I'll spend half an hour dressing up for the rally.

Some information about the boxed version of the Legion expansion pack:
The cost of the standard version is $50.
The cost of the digital deluxe version is $70.
By pre-ordering, you will get one boost to level 100.
Additionally, pre-order holders will get one week earlier access to the new Demon Hunter class (interestingly, you can only have one Demon Hunter per server).

Currently, the alpha testing of Legion is underway, to which selected players have been invited. Thanks to leaks, we've learned about a certain Goblin Treasurer, two stars, and a Kong dance that have appeared in the game. No word on if they will be in the final version, but who knows? With Blizzard, anything is possible.

Does the latest addition have a chance to bring World of Warcraft back into favor? In my opinion, no. Certainly there will be crowds of interested people, the servers will be besieged for several weeks, but when all the hype passes, players will leave. All because the production is increasingly casual and does not offer anything new. I make no secret of the fact that it's (in my opinion) still an excellent title, but its time has passed. I'm afraid we are watching the slow death of the MMORPG giant that is (was?) Blizzard.

What do you think? Legion will make World of Warcraft stand on its feet again and boast 10 million subscribers, or will it only prolong the agony of this old man?